Today I am reviewing The Last Timekeepers and the Arch of Atlantis by Sharon Ledwith. She is a fellow Musa Publishing author and is commemorating the anniversary of the release of her first book with a month-long celebration.
Stop by her blog for a chance to win all sorts of great prizes and for the opportunity to check out her book! 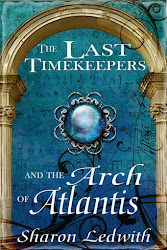 The Last Timekeepers and the Arch of Atlantis
by Sharon Ledwith

The theme of children leaving their boring old world and travelling into a faraway realm filled with mystery and adventure is a common one in literature, whether it’s out the window, into the wardrobe, or through the looking glass. Yet Sharon Ledwith has managed to add some interesting elements to the premise in her book The Last Timekeepers and the Arch of Atlantis. First, her children are a few years older than is usual. Plus, they are actually accompanied by a couple of adults. Also, the children have the opportunity to affect human history, past and future.
Ledwith’s book begins with a food fight in the middle-school cafeteria. The five students who get in trouble for it might not have been the ones who started it, but they are the ones who got caught. Choosing a few days of hard labour over suspension, the five come together despite their differences to start serving their sentence. They begin cleaning up the dilapidated backyard of one of their teachers--a woman who is rumoured around school to practice witchcraft. When the young landscapers discover an old forgotten stone arch, their world begins to turn inside out.
The main point-of-view character is Amanda Sault, a young girl with the heart of a poet, who comes from a somewhat troubled home life. She is the key which enables the Arch to open. And when it does, Amanda, her four schoolmates, their teacher, and the uncle of one of the kids, a recently disgraced archaeologist, journey into, through, and beyond the arch, arriving in what is described as the remnants of Atlantis. There they meet Lilith, the keeper of the arch, who tells them that they have been chosen to be the last timekeepers, guardians of history.
With Amanda serving as Scribe, the one to record the group’s missions, the seven are transported to thirteenth century England where--or rather, when--they must protect a young Robin Hood and his “band of merry teens.” Robin and his friends, along with the legend that will inspire so many generations afterward, are under threat from the machinations of the conniving Professor Crowley, servant of Belial, the evil entity who is using another Atlantean arch to send human history into chaos.
The group must work together to solve riddles, to escape traps, and to rescue the past and its future in order to set the path of history right. A spiraling adventure which deftly combines compelling visions of various points of the past with a fresh point of view from the present.

Young adult or middle-grade are not genres I explore very often. Of course, my usual fare of contemporary and classic adult literature is not something I have had much chance to read very often lately either, at least not since I began pursuing a degree in Elementary Education. It seems all I’ve read in the past three years has been children’s books (a trend that has only doubled since my wife and I had twins just over a year ago--twins who, thankfully, love being read to). Anyhow, the characters seemed a bit stereotypical at points. And while that may or may not be true, it is true that the many kids from middle-school tend to make themselves stereotypical in their attempts just to fit in. The same might also be said, in the case of this book, of many kids from the middle-ages. So, perhaps the author has hit on an important point of authenticity. Also, the students do begin as a chance collection of disparate characters, yet, they seem determined not to let go of their adolescent animosity. The group of people chosen to protect history did make some connections by the end, but one might figure sharing such a revelation of destiny, as well as delving as a team into harrowing adventures, would have brought them closer together before then. Still, perhaps the author has captured common teen-age stubbornness. Or perhaps she is simply saving some material for later, as there does appear to exist a plethora of unresolved issues which promise to be explored in future volumes.
The author does a great job of capturing the voices of her characters, keeping them authentic to their ages. It might be one of her greatest strengths as a writer, and it’s an important one. That said, some of the constant insults tossed between teenagers wore a bit thin. Reference to a certain feminine hygiene apparatus turns up way too often. Also, I personally had trouble accepting the contrivance of a pre-pubescent genius having the ability to read ancient Egyptian hieroglyphics. Really, though, these are minor quips which do not detract from the adventure or the story as a whole.
I like the glimpse of Atlantis and the juxtaposition of so many periods in history. Also, the plot-points of how the troupe gets glances into the origins of what shall eventually become legend along with all the inadvertent influences the group has in helping those legends take root are skillfully written. A reader is compelled to wonder just how much of history is really accurate and how much is totally misunderstood, the wrong ideas being sent perpetually forward.
The author has said that the idea for this story came to her in a dream some fifteen years ago and that she had been working on it ever since; so, some of the dated feeling is understandable. The world has changed quite a bit since she began, and the author cleverly incorporates some of those changes without drastically altering the story even while using them to her advantage. For instance, the absence of cell phones, which--it’s easy to forget--were far from ubiquitous a decade ago, is explained. Yet the very same device is used as an important tool in one of the climactic scenes. Such editing maneuvers are difficult when one has been writing and rewriting a story for so long. I admire Ledwith immensely for her dexterity in that regard.
Some of my favourite parts include of the descriptions of the shadows that lie within the essence of Belial, Thirteenth Magus of the Arcane Tradition and keeper of the fifth arch of Atlantis. They are stirring: “A dark mind that lives in the past to feed off the evil energy continuing to stagnate there.” and  “He is the shadow side of humanity — the voice of knowledge, of suffering, of lies —” I hope Ledwith captures even more of that kind of language in volumes to come.
Furthermore, some of the most intriguing components of this tale may be what the author fleetingly mentions yet leaves completely open for future stories. In fact, the author does extraordinarily well to establish a world full of potential for other missions and other books. The possibilities going forth--or back, as it were--are endless.

Posted by Devin Hodgins at 10:43 AM No comments: 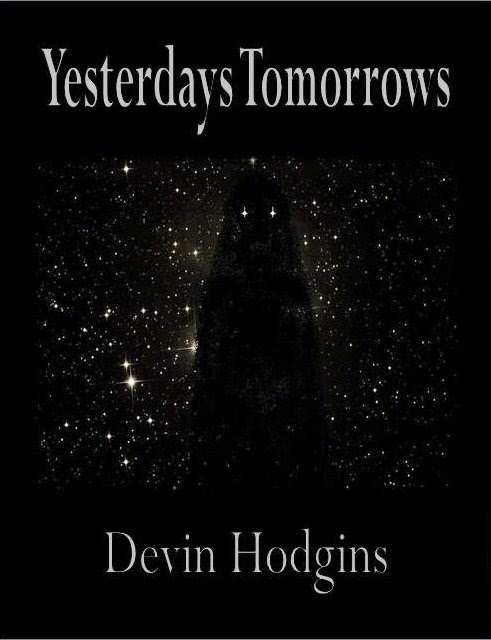